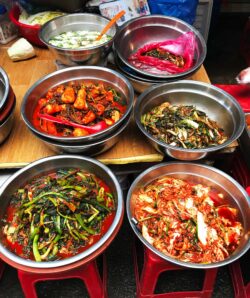 When one wants to define ‘vast variety‘ the Indian culture is an ideal reference. India is beautifully decorative and very rich in culture.  The Indian culture can be extremely vibrant with their theatrical expression.  In addition, Indian cuisine, even Indian vegan food, can be just as colorfully flavored as their festival garment wear.  For example, Seitan Vindaloo is a very spicy Indian dish. Vindaloo is said to be one of the spiciest curries in Indian cuisine. It’s a tomato-based entrée that is very tangy and wonderfully flavored. The non-vegan version is apparently quite meaty, but then again, this is of no concern.  Punjabi Chana Masala is a generationally passed down recipe derived from an authentic Punjabi lineage. Punjab is a region of Southeast Asia. It’s the northern part of the Indian subcontinent between India and Pakistan. Punjabi Chana Masala is said to be authentically “out of this world”, flavor-wise.

Palak Paneer, in which tofu stands in for dairy cheese, is common amongst Indian cuisine. It is an un-aged, non-melting, feta based kind of cheese. As mentioned, this dished is prepared with tofu substituting for the cheese.  Also including spinach and just the right blend of spices, it comes out to be simply delicious. Masoor Dal is an Indian dish hailing from Northern India. Dal is a thick Indian lentil stew. It’s flavored with red warm spices giving it a tangy pop. Tikka Masala is another Northern Indian dish. The vegan version contains tofu as well, moderately peppered with spices for the readily prepared vegan palette.

India’s seemingly limitless array of different cultures is so intriguing from several different aspects.  When speaking in terms of cultural diversity within language, religion, and various cultures; India is unrivaled.  Not to mention, the varying geographical landscape and fluctuating climate conditions when traveling from one region of India to another. These ever-changing variations in the elements completely dictate which type of foods dominate which different region. In addition to elemental factors, religion probably has had the greatest impact on Indian cuisine consumption.

Indians have been practicing Hinduism, Buddhism, and Jainism for thousands of years causing them to completely reject  meat, fish, and eggs from their diets.  No where else in the world will you find a majority of a population living as vegetarians for nearly as long as the people of India have been.  More than just dietary demand, veganism and vegetarianism are absolutely ways by which the people of India proudly live.