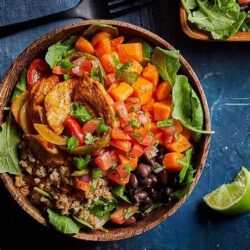 Jamaican vegan food derives from the vegan Ital diet of the Rastafarians of Jamaica.  A whole-food, pure, and natural diet with little to no additives is the Rastafarian Ital way of eating.  In other words, Jamaican vegan food is otherwise known as the Rastafarian Ital Movement. The Ital Movement or the Ital diet promotes food consumption without chemicals.  This chemical free diet is filled with fresh fruits, vegetables, and whole grains. The Rastafarians definitely have the right idea when it comes to clean dietary habits and food consumption philosophy.  The Jamaican food consumption philosophy extends to include beverages as well in the form of natural juice tonics.  As a result, the restorative properties of natural juices are seen as “fantastic powers” within this food philosophy. These life restoring juice tonics are made readily available at many Jamaican bistros and restaurants.

Jamaican vegan food and Jamaican food in general is heavily influenced by both Asian cuisine and Indian cultural cuisine.  the Indian culture’s dietary influence over Jamaican food is the reason for its vegetarian bias. When we venture away from the coasts of Jamaica’s white sandy beaches and crystal clear blue oceanic waters, we will start to see the rural regions of Jamaica.  These regions of the country have given way to agriculture and farming.  Jamaica’s tropical climate allows for a productive agriculture and farming industry.  The mountains of Jamaica are home to wild and organic grown herbs and spices. Most noteworthy, the mountainous regions of the countryside are rumored to provide visitors with a delightful sensory blessing for the nose. Wild garlic, thyme, and ginger can be smelled permeating throughout the air as one ventures through these mountainous regions.

“Ital is vital” is another mantra of the Jamaican or Rastafarian food philosophy.  As we mentioned earlier, this philosophy is heavily influenced by the Indian culture’s dietary habits and beliefs.  Consequently, the Ital diet is ‘centered around restoring vital energy to the diet’ (Kilifin,2017).  On the other hand, veganism is not greatly celebrated in Jamaica. I know that was a curve ball, to say the least. Yes, the majority of Rastafarians are either devout vegetarians or vegans. However, one needs to keep in mind that Jamaica still remains an island country. Seafood is king at many of Jamaican’s dinner tables.  The flip side of that coin is that it is extremely easy to maintain a veganistic lifestyle in Jamaica. The country’s farming and agricultral industry provides an array of fresh fruits and veggies to be enjoyed year round.

Surprisingly, many local Jamaican dishes are naturally vegetarian or vegan. Ackee (omitting fish), Breadfruit, Callaloo, Boiled Dumpling, and Plantains are just a few Jamaican dishes that cater to the vegan’s palette ever so tastefully. Jamaican stews are among many tourists’ favorite Jamaican dishes. Stews are made with kidney beans and chickpeas which contain that unique island flavoring.  Other popular Jamaican dishes are Sun Dried Tomato Burgers, Black Bean and Quinoa Burgers, and Vegan Chickpea Curry, just to name a few (Jessica in the Kitchen, 2021).