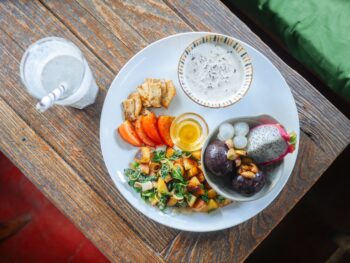 When introducing Thai vegan food, “Hooray for Jey” is not me cheering for a friend nor acquaintance of any kind, just to be clear. However, if you’re reading this and your name happens to be ‘Jey’ or ‘Jay’ even, I’m totally rooting for you; you got this. . . whatever it may be!  My enthusiasm pertains to the word ‘Jey’, as the Siamese word for “vegan”.  Siamese is the Tai dialect of Southeast Asia and the literary language of Thailand. Be careful though!  We have been down this road before with transitional language meanings (Japanese vegan food) as they correlate with strict dietary guidelines and the exclusion of certain undesired variables within dish servitude. Foreign languages can be as tricky as English may be to anyone else unfamiliar with the English language. Of course, I’m speaking for vegans traveling to Thailand or planning an extended stay in this beautiful region of Asia.

“Chan ghin jey” is a male declaring themselves as vegan in Tai.  A female who wants to identify themselves as vegan would say “Pom ghin jey“.  What is a declaration without the subject by which the declaring is done?  In other words, where’s the Thai vegan food?!?!  Since, I’m the one writing this article, one would assume that I wouldn’t be asking a question of this nature.  So without any further adieu, enter:  Pineapple Thai Fried Rice!  Pineapple Thai Fried Rice is basically just as the moniker coveys! Fried Jasmine Thai fried rice is, of course, fried with pineapple chunks, cashews, peas, and currants.  Curry spices are peppered in along with these ingredients. Traditionally, there is egg mixed in with this dish, but the vegan version “Hulk smashes” the yolk to ashes!

Vegan Yellow Thai Curry mixed with veggies has my mouth watering as I simply type the title of this recipe out for this article. My knees always become shaky at the very mention of “curry”;  or is that “Carrie”?  Boy, she is beautiful! Oops, my apologies folks, another conversation for another article perhaps! The Thai Yellow curries are considerably milder than their green or red curry counterparts. Remember, chili paste is primarily the key to the spiciness. Turn that down, and so follows the kick. Serve this entrée with fresh lime and cilantro and you will negate the need for curry or chili paste from the get-go! This recipe already produces a beautiful array of flavors originating from the ingredients themselves.

Veggie Tom Yum Soup, is one more noteworthy recipe mention.  Serve this with rice or rice noodles as a dinner party appetizer or whip it up for yourself on a  Tuesday evening. This is an “easy-to-make” meal with a satisfying fill. Thai vegan food is not difficult to come by whether ordering it in an eatery in Bangkok, or preparing it for oneself at home in New Jersey. Thailand’s traditional recipes and dishes are mostly composed of veggies with the addition of noodles. Thailand’s cuisine medley of fresh ingredients coupled with aromatic spices and kicking herbs and chilies make way for a flavorful symphony of a veganism quartet sung beautifully by your taste buds to your longing pallet.