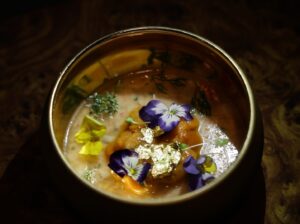 Chinese vegan food, or, exclusively plant-based cuisine is seemingly few and far between in China.  In Chinese culture, eating meat is equated with an individual showing signs of prosperity.  Much like with Japanese cooking, In China, meat is not only the usual focal point of nearly every entrée, but the food itself is literally peppered with tiny pieces of meat as if it were some type of garnish.  In addition to that, miniscule pieces of egg are almost always another decorative additive sprinkled over top of meals as a way of including a little insult with your misery, if you will.  Although, this is never done to truly insult or offend anyone, it could be quite discouraging from a vegan’s or even possibly a vegetarian’s perspective, to say the least.

China became reformed in the late 1970’s and up until then, meat was seen as a luxury menu item.  Animal products have definitely become more plentiful, accessible, and much more affordable in modern times.  A large portion of China still feel that a meatless diet constitutes starvation and malnutrition.  They favor dietary habits with the inclusion of meat at every sitting.   They believe that it is extremely nutritious and will ensure vitality and good health. Contrarily, they feel that its omission will leave an individual feeling weak and even become sick.  This way of thinking has proven to be the societal norm for Chinese culture for generations. Nevertheless, whether here in America, or abroad in Asia, change is the one and only universal constant in all lives that eventually everyone must agree to submit to at one given time or another.

The young and upcoming Chinese generation is starting to raise more awareness to the negative impacts that meat-consumption can have on health.  In addition, environmental issues and wildlife conservation, as well as, animal rights are being pushed to the forefront and confronted. It has even been said to have contributed to an actual vegan movement being sparked recently.  Vegetarianism is actually deeply rooted in Chinese culture from a religious standpoint. Buddhist Monks are forbidden to kill animals for consumption or accept anything that has been dispatched for them. Some Chinese would demonstrate their devotion to their religion and the Buddha, and refuse to eat meat for certain periods of time in earlier days.

That is already sounding like a zesty and kick-packing punch of spice. It’s the marinades and spices that really bring all of these dishes together. Now that was a great ending to bleak kind of start when we first began talking about veganism in China. I think the answer to the question at hand is one of definite and delicious VEGAN PROSPERITY!