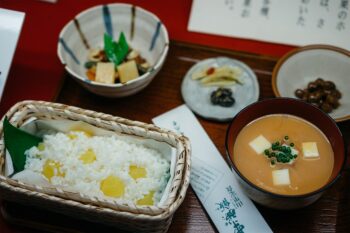 Japanese Vegan Food, or vegan food in Japan is a little bit more complicated than one might initially think.  Japanese food as a whole is centered around several main staples at its core. These staples include rice, mushrooms, soy products, seaweed, vegetables, and noodles.  Wow, Japan’s sounding like a vegan person’s paradise straight from the jump, right?!  Not so fast. Think about Japan’s geography for a second.  For those who aren’t too familiar with Asia’s geographical make-up, Japan is a country made from a collection of a few large islands in the Pacific Ocean.  Japan is, quite literally, a nation of islands.  Be that as it may, seafood is Japan’s number one cuisine dominating the dinner table.  Seafood, however, is not inherently vegan.  So you see?  Characteristically, Japanese food at its core, is knocking on the door of vegan dietitians from a viewpoint of staple content.  Yet, in spite of these distinctions, Japanese cuisine happens to be the least vegan-friendly when considering seafood’s overwhelming presence due to Japan’s geographic location. It’s quite the ‘catch 22’.

Not only is Japanese food dominated by the mere presence of animals from the ocean, but seafood’s stronghold on Japanese cuisine is rooted all the down to the very flavoring of the food itself.  If one desires badly enough, fish can be avoided at all costs.  What about fish-based seasonings? Yes, fish-based seasoning powders. Japan is full of them.  Dashi is a fish-based seasoning powder made up of predominantly fish flakes.  Dashi is in everything when it comes to Japanese cooking.  Dashi is used in all types of Japanese dishes.  They use it in rice dishes, soups, sauces, dressings, sushis and many other entrees. The famous umami flavoring which is so distinctly Japanese is provided by dashi.  Umami is almost impossible to replicate using any other ingredients.  As if maintaining a vegan diet in Japan wasn’t tricky enough, Japanese chefs are known to regularly add bits of fish or pork seasoning to all of their dishes as well.

Don’t fret just yet my vegan enthusiasts.  Remember Japan’s core staple foods?  Well, using these staple foods with a little creativity and you could surely maintain a healthy vegan diet in Japan if you were to do it yourself.  Of course, attempting to familiarize yourself with Japanese cuisine and cooking well enough to be able to engineer platters to fit your vegan lifestyle will definitely require some assistance. A Japanese vegan cookbook would be the ideal tool to utilize in your efforts.  Japanese Cooking: Contemporary and Traditional by Miyoko Schinner is a Japanese vegan cookbook printed in 1999.  Miyoko Schinner is a famous ‘superstar’ chef of the vegan world.  Schinner’s 174 page vegan cookbook is said to be a triumph amongst vegans who rely on it’s guidance. Miyoko’s teachings will enable you to prepare classic vegan versions of authentic Japanese dishes using Japanese cooking techniques. So when it comes to Japanese vegan food and cooking; all is not lost afterall!  Now that is some delicious news!