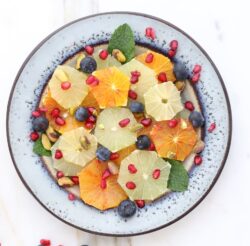 Venezuelan vegan food mango passion all aboard!  Next stop coming up is Flavortown. I’m your flavor-neighbor and GeeknVegan Kyle Carper.  Vegan diets in South and Central America are recognized as simply being, regular diets. As Gabriel, a Venezuelan plant-based food enthusiast explains, one doesn’t need certain foods in order to classify as vegan.  Vegetables, fruits, and a starch are the qualifying ingredients for a recipe toward living a ‘king or queen veganisitc’ way of life. Similar to “Veganistic”, “Veganology” is a term that I have just recently adopted to loosely mean the ‘study of veganism’.  Whether or not someone else has coined this term prior to me to actually have another definition is beyond my knowledge, however, this is my declaration as of now.  I say this because veganism as a whole is deeper than just a word or classification of person.  We use words to better form descriptions of people, acknowledging certain aspects of a person’s behaviors. One word, however, does not define a person completely. Neither does several. The same can be said for diets.  Classifying as a vegan pertains to the life that a person chooses to lead as much as it does the food that they do or do not ingest.

Depending on where one lives in the world, a person’s resources are ultimately limited to the environment in which they reside.  As a result, a majority of people’s diets are mostly governed by the land in which they call home. In Venezuela and other South American countries, vegan products are rather limited.  However, in Brazil, Columbia, and Argentina vegan products are much more plentiful.  Tofu, for example, may only be located in the city of Caracas in  the Chinese market on Sundays. The local Chinese inhabitants manufacture the tofu along with your choice of sweetened or unsweetened soy milk. Other milks like almond and rice are said to be very expensive. It is recommended that one produces their own rather than pay market price.