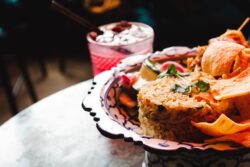 Veganism comes relatively easy to the Jewish culture compared to several of the other ethnicities we’ve examined over these past few months. The plethora of Jewish holidays honored every year by the Jewish populace carry with them traditional holiday recipes that aren’t necessarily vegan-friendly.  Then again, whoever said veganism was seeking friendship?  One’s Special Holiday Kosher Piping Hot Pot Roast can always be packaged up and swapped out with an almighty “plant-based power” alternative.  Nevertheless, it is most notably easier for one to maintain a vegan dietary lifestyle once all of the Jewish holidays have been cycled through.

Judaism, it seems, has cultivated the very notion of a “plant-based power” alternative when it comes to meat substitution options. They’ve all but cornered the market, so to speak.  In 2017, a trend  started hitting the post feeds of social networking platforms and recipe email inboxes all over the world . This fairly new trend in vegetarian/vegan meat replacements has been taking the organically savvy by storm, according to Shannon Sharna of ‘Holiday Food’. Jackfruit is the famously “beefy-but-everything-but-beef”, vegetarian stand-in for actual meat. There are several other well-known meat substitutes such as eggplant, potatoes, lentils, beans and legumes. Jackfruit, however, is said to be the one alternative that is incredibly meaty, hearty and even possesses an eerily similar meat-like taste and texture when cooked.

Jack of all entrees

Jackfruit is native to India. It has also been cultivated in Southeast Asia, South America, Australia, and across the Caribbean.  Jewish chefs and cooks, like Shannon Sharna, quickly took notice of this “super fruit”, conducted some research, and applied its use to their own various meat-centered dishes such as BBQ briskets and roasts. Sharna has even Shabbat holiday dinners with Jackfruit as the central main meat-free ingredient of all entrees.

Jewish vegan food traditionally is incredibly delicious because of the non-vegan dairy, meat, and egg richness that we’ve all grown into loving and become accustomed to filling our bellies. These comforting dishes can be replicated without fail on a plant-based foundation that will have one jumping for joy.  Jewish Kosher laws, thankfully, become negated  on ‘planet vegan’.

The egg bread known as Challah, is among if not the, best known of the Jewish foods period. Veganizing this predominately, entirely egg based bread will automatically simplify the rest.  The eggs can be replaced with flax seed, chia seeds, pumpkin purée, vegan mayonnaise, and aquafaba. Decide on and secure some of these ingredients. Take note of these following cookbooks: How to Cook and Bake without Eggs &Tips for Using Flax and Chia Seeds to Replace Eggs in Baking and Cooking.  Next, one can enjoy any and all Jewish festive celebrations as you are now a seasoned-beginner, Jewish Vegan Chef in the making.  It also wouldn’t hurt to have an actual Jewish vegan chef assisting you  every step of the way, as well! Happy Veganing.