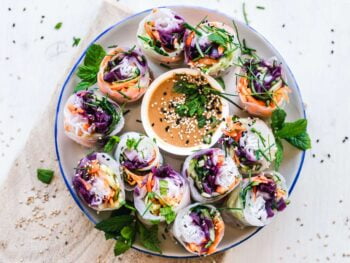 I studied the Korean Martial Arts of Tae Kwon Do in my early childhood to adolescent years.  I’ve always found the Korean culture to be very beautiful as well as extremely disciplined. One could only speculate that Korea’s rigidness of tradition would apply to all aspects of Korean culture.  However, without actually living in Korea, one’s assessment could only be speculation. Korean vegan food, I’ve read, is Mashita.  Mashita translates as, “It’s Delicious” in Korean; says Melinda Mckee of PETA.org. Kimbap, a Japanese style sushi roll, can be prepared with many different types of ingredients. The rice in Kimbap is salted and seasoned with sesame oil and vinegar. This little vegan seaweed roll of a treat will surely fill your belly with tasty goodness.

Another delicious Korean entree is Japchae.  Japchae are sweet potato noodles. They are a staple in Korea. There is Japchae that is served with pork and a vegan Japchae that is served without, of course. These noodles are most often prepared with veggies such as mushrooms, carrots and cabbage. Japchae is said to make an excellent side dish.  Pajeon, a green onion pancake, is made with eggs and sometimes cut up squid. The vegan version, obviously, is prepared omitting any type of meat.

On the other hand, there is a savory dipping sauce that is paired with this dish that is said to be out of sight.  Last but not least of GeeknVegan’s presentation of some of Korea’s delicious vegan platters is Bibimbap.  Bibimbap is another Korean staple that is a spicy mix of vegetables and rice. Gochujang is a Korean red chili paste cooked within the veggie mix giving it it’s spicy zest. This gochujang is said to be the heart of bibimbap.  Sometimes this entree is served in a hot stone bowl following traditions.