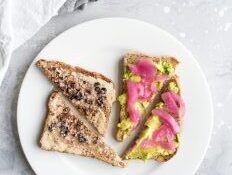 No need to get your frittatas in a frenzy because veganism may be on the rise in France.  French food is notoriously very cheesy and meaty in the traditional sense.  French vegan food being all but non-existent.  So it comes as no surprise to vegans when they find themselves spread noticeably thin across a country with the cuisine by which all culinary techniques are measured.  However, as an increasing vegan populace continues to expand all over the globe, France is one more destination targeted for a veganistic stronghold.  Traditionally, an individual seeking a french entree without the presence of meat, cheese, or egg would find it very difficult, to say the least.  A number of vegan enthusiasts felt this had to change.  These enthusiasts forged this change by applying the D.I.Y. methodology and crafting traditional French food with their veganistic pizzaz.

French food is not as heavy as generally misconceived.  Although french desserts can be extremely rich, they are usually balanced with lighter dishes containing simple fruits. Many french dishes almost always include regional products with fresh fruits and vegetables. “Veganizing” classic french entrees heavy with cream, butter, and cheese requires only a swapping out of the dairy and substituting it with plant-based alternative ingredients.  A great way to begin converting classic to vegan is to start with the french Hors d’Oeuvres. French Tarts are popular  menu items made with buttery, flaky pie crusts.  Vegan versions such as the Rustic Pesto and Heirloom Tomato Tarts are prepared with olive oil, coconut oil, or vegan butter in place of dairy butter in order to get the same flaky crust savoriness.

It is impossible to discuss french Hors d’Oeuvres without including the classic french cheese fondue in the conversation.  A vegan version of french cheese fondue contains a Creamy and Cheesy Nut-Free Chickpea Fondue prepared with wholesome garbanzo beans.  French Onion Soup is another favorite flavor of France. This dish is commonly prepared with starches, butters, creams, eggs, rice, or flours.  Cream of Pumpkin,  Apple Soup, Creamy Cashew and Chestnut Soup, are all delicious vegan alternatives to the French Onion frenzy.

France is becoming more vegan-friendly day by day.  Some people aren’t as D.I.Y. driven as others, and that is quite alright. Locating french vegan food is all about knowing where to look. Vegan restaurants are scattered throughout several french cities such as Paris or Lyons. In addition, there are a number of french supermarkets that contain brands with vegan alternative options like Cereal.  E-leclerc is a french supermarket that has climbed aboard the vegan bandwagon, offering a meaty substitute brand to be sold in their stores called Nat & Vie.  The french vegan lifestyle seems to be steadily gaining traction as the plant-based alternatives continue to grow tastier and tastier.