Brazilian vegan food is the region of the world by which this culinary technique originates from. 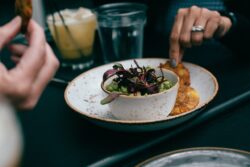 Brazilian vegan food is as tasty as the country it originates from. Brazil is an exuberant, vibrant, and wonderous country.  Brazil is planet Earth’s fifth largest country.  As a result, Brazil also stands as the world’s fifth most populous country.   Most of the northwestern region of Brazil is home to nearly two-thirds of the […]